Resonating with the Youth of Jamaica: Music Workshops at The Freedom Skatepark

After a year and a half of COVID-19 reality, four months of planning, two planes and one night spent in Toronto airport, my dream filled with anxiety-induced anticipation has come true. A frosty aluminium box has successfully transported me from a gloomy temperate London into a tropical dreamland. After a long week prior to my journey, in which both my mind and body have put me on the verge of insanity (in retrospect all they did was confirming my hypochondriac tendencies), the humid air and the hot sun on my skin in compliant unison seemed to suggest that I have in fact made it.

I was in Kingston, Jamaica, 10 miles away from the final stop. In was heading to Bull Bay located on the South-Eastern coast of the biggest island in the Caribbean. I was retracing the journey that in February 2020, a group of passionate, hard-working people have traced in pursuit of the Freedom Skatepark. Both international volunteers and local skateboarders spent 5 weeks of their life building a space in which new identities were to flourish and be celebrated through the sport and culture that skateboarding entails. That’s where I was going to spend every day in the month ahead and there, I was about to meet a group of young boys, girls, skaters, community members and the fabled Energetic Nomads, soon to explore their avocations beyond just skating as well as falling into a special place in my heart. 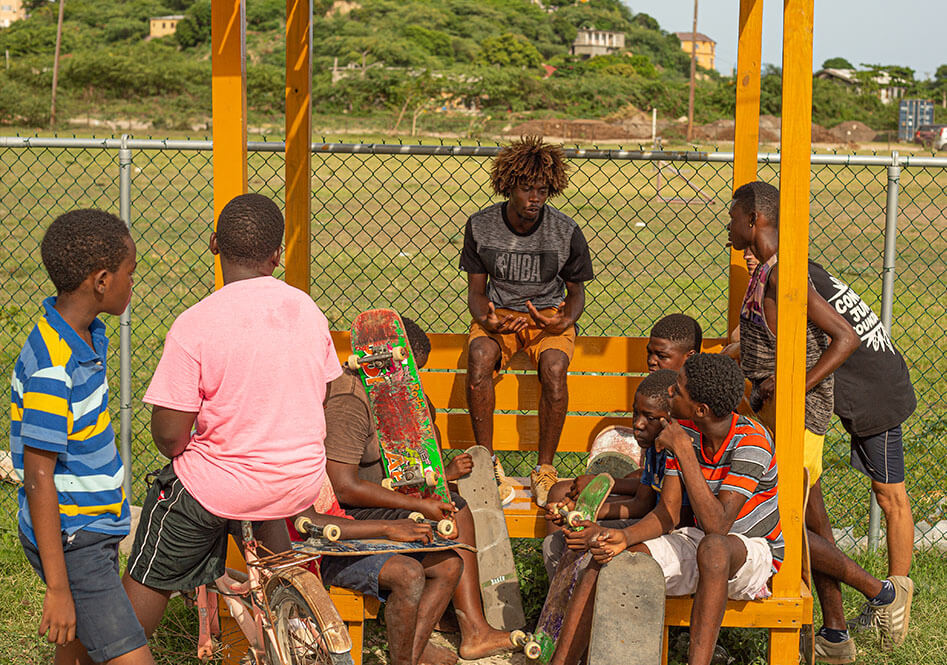 Jamaican youth hanging out at the Freedom Skatepark

When the Freedom Skatepark was coming to life at the start of 2020, nobody has thought how seminal this place would become in the light of an already brewing pandemic. Everywhere around the world, COVID-19 has not only crushed the life we all thought we knew so well, but has cursed us to wonder whether we would ever return to a life we once saw as determined. Although everyone has been affected by this truly global event, developing countries and their youth were burdened by its implications in the most severe way. The kids of Bull Bay were no exception. There is no doubt that the plague of our time has generated a new, harsh reality for all children across the Global South. However, I believe that Freedom Skatepark took part in shaping this unprecedented time a little differently for the youth of Bull Bay.

Upon my arrival in July 2021 the children of Jamaica have been faced with no access to school facilities for what initially was meant to be 2 weeks which had now adamantly stretched to a year and a half. Schools were obliged to provide emergency online teaching taking over any face-to-face learning. Yet, with approximately 40% of Jamaican families not having access to the internet at home, children coming from lower-income households were affected disproportionally by the arising challenges of the new reality threaded with endless boredom and uncertainty. Although the Freedom Skatepark was built by mid-April 2020, following Jamaica’s national lockdown guidelines it remained closed until August the same year. With the skatepark opening in August, CJF was finally able to set in motion the Edu-Skate – a positive youth development programme, providing skateboarding lessons, group discussions, workshops, and field trips to the local young people. 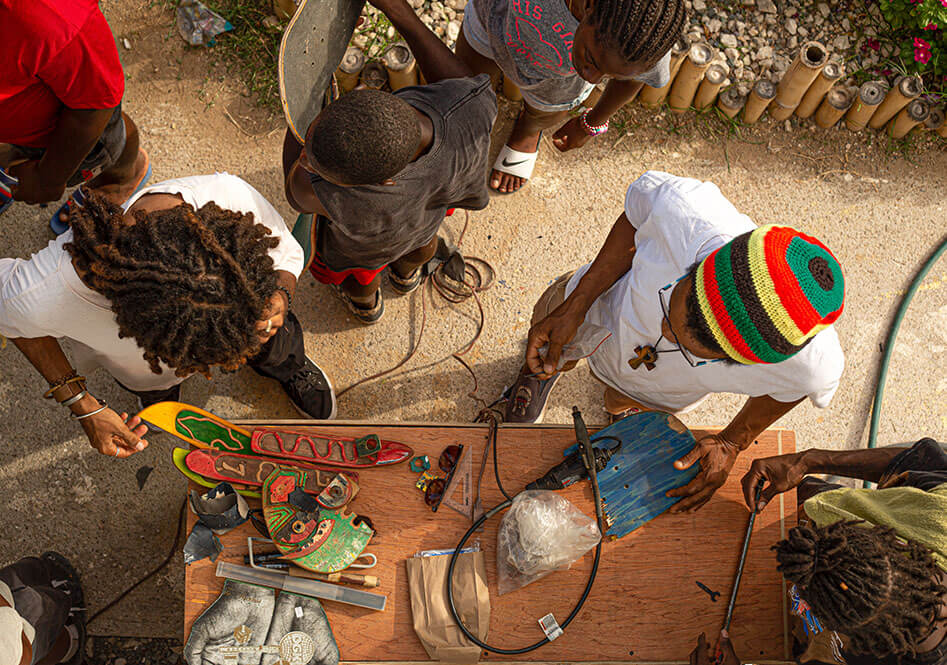 For some children of Bull Bay, the skatepark became more than a space for physical endeavours; it became central to constructive education, a chance for long-lost routine and regular human interaction.

In March 2021 I chucked an e-mail at Tim – the Freedom Skatepark Programme Manager at the time, in which I offered myself as an additional body and mind to help with the summer activities. With much enthusiasm as well as with pragmatic carefulness to underline the uncertainty inherent to the nature of planning anything during the pandemic, Tim and I began exchanging some workshop ideas. The challenge here was to integrate my skills with the interests of the kids, possible support on the grounds and the realistic conditions of the place. Given my educational background being predominantly based around music, sound and art, the initial idea was very specific to a personal interest of mine, leaning towards a more unorthodox approach to sound-making. During my time at the university I grew interested in the notion of graphic-scores which deviates from western music notation in a way that the music is represented through non-western, non-classical free form, moulded by the artist. In theory then, regardless of one’s prior musical education, anyone has an opportunity to compose and graphically represent the sound. Although a seemingly equitable notion, Tim was able to contextualise my ideas into the lived experience of working with the children of Bull Bay. It resulted in highlighting my own western bounds of sound perception which would neither translate nor align with the children’s understanding of music. 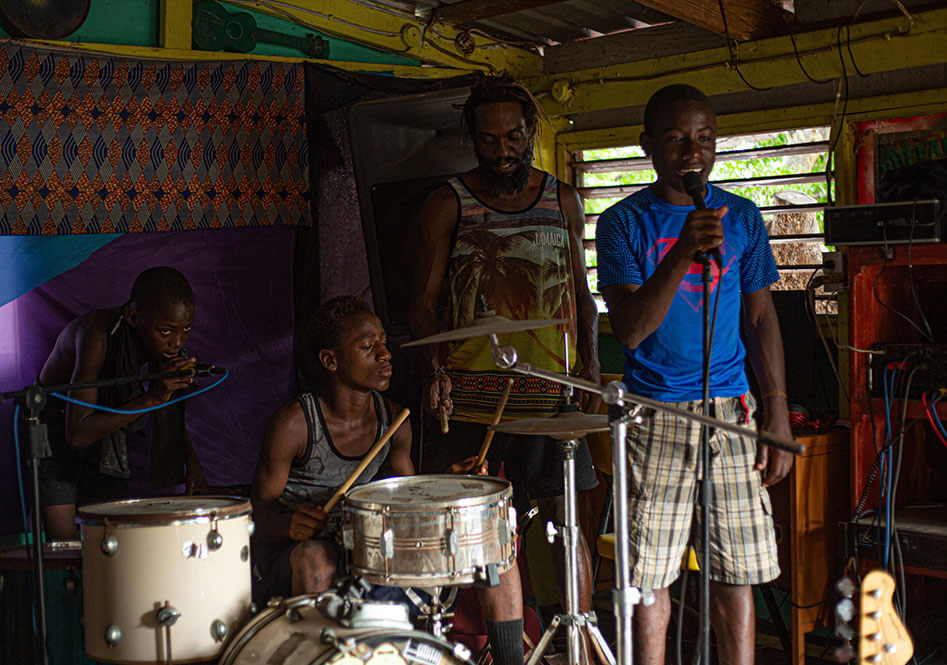 Internationally recognised for its rich sound culture, Jamaica resonated across the globe with the well-known reggae riddims, fragmented echoes of dub and the layered vocals of dancehall that have irreversibly influenced (and still do) the Western musical scene. Through understanding the role that music has had in shaping the black identity in post-colonial Jamaica, it was important to provide the children with as much autonomy as possible in the process. The workshops were to become a space for their sonic expression, not a western framework on “how you should make music”. To do so, it was crucial to understand what music meant to the children. Tim already knew the most popular artists amongst the local youth, so he started setting my homework by throwing their names at me. More importantly however long before, he began to plant the idea of the music workshops on the skatepark grounds. Soon enough, a little unassuming piece of paper patiently waiting to be approached by the sound of dusty, tired after-skating-feet began to feel the weight of ink on its surface. We had a bunch of kids who wanted to make music. In fact, Tim reported to have started noticing a rare sight of small irregular groups, gathered around the notebook master, scribbling in and reciting melodic poetries. We could not have asked for a better clue. With all the structural logistics of the project still to be set, we already started to feel the excitement because we knew exactly what we are going to do – let the boys write and record their own songs. 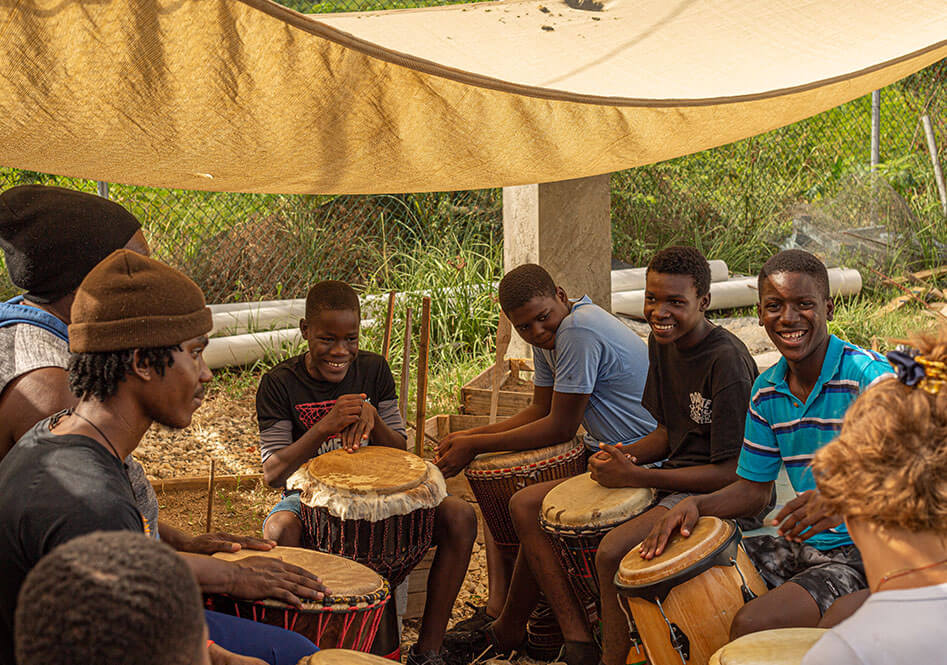 Percussion workshop at the Freedom Skatepark.

As weeks passed by, marked by intercontinental video calls with Tim, the plans gradually became more solid and slowly began to transform into reality. The workshops were going to happen over 4 weeks, each week focusing on one element of the song, starting with the drums, followed by melody towards the final component – the lyrics. Tim had an extremely big part in this as he grasped my ideas and was able to ground them into the world of the Bull Bay community. He also knew we could not do it all by ourselves. We would neither be resourceful nor firm enough to manage a group of adolescent boys wanting to make music. We were in luck however as Bull Bay, like much of Jamaica, is blessed by madly talented and big-hearted artists. Inilek was one of them. Pivotal to the project, a local musician and creative soul, a surfer and if that wasn’t enough, a marine biologist, offered to produce the songs and facilitate the music studio at Jamnesia – a surfing camp in Bull Bay, only a walk away from the Freedom Skatepark. Icah – a sound magician, Homework Club teacher, professional surfer, and resident of Jamnesia would provide us with his wisdoms and a collection of the wackiest instruments for the melody workshops. We also had two professional West-African drum players who were to open the music project with a drumming workshop and ground the rhythmic beats of the songs produced in the collective history of the children’s heritage. 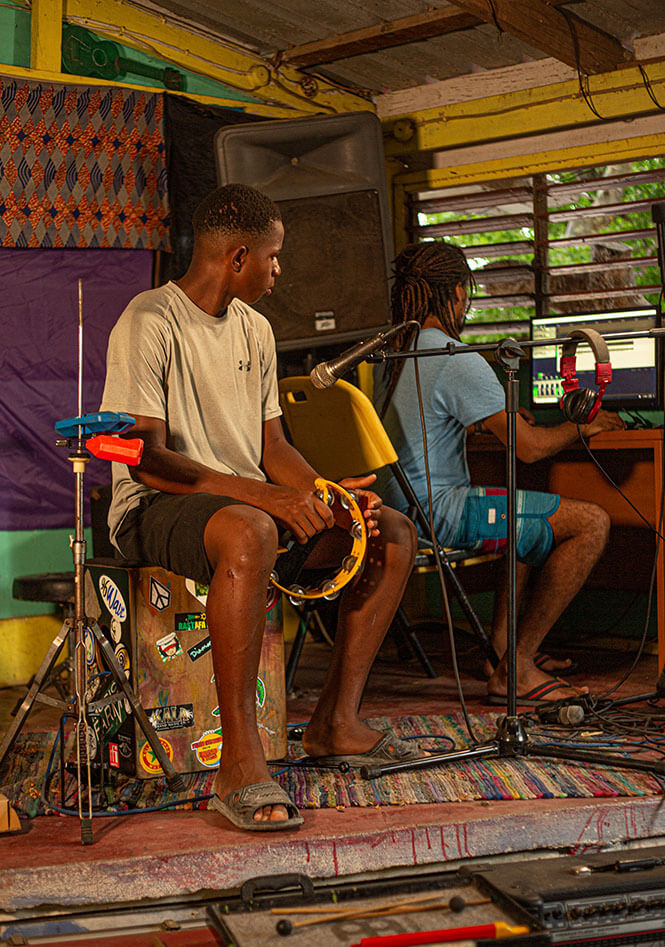 Sat in a grey from dust Mitsubishi SUV, my head was trembling from the holey road leading towards the Freedom Skatepark. As I finally stepped on the the hot concrete grounds of the park a group of boys were cooling off in the shade, flustered from the intermittent skating. From that first awkward introduction, I showed up to the same spot almost every day and every day their faces brightened up slightly more with a sense of familiarity resulted from the bonds made of making sounds together. By no means was it an easy process. Organising two groups of young boys coming from volatile backgrounds enhanced by the instability of the pandemic was a truly exigent experience. I would have to write a book to squeeze all the things I’ve learnt from this experience but definitely one worth mentioning was learning of the huge discrepancy what plans mean in Jamaica as opposed to what they mean in the west. All I have to say is that island time is very much a real thing and that I am now much better at letting go of the “original plan” and making things work in the moment. Despite the unavoidable dramas that come in a package when working with hormonal teenagers (anywhere in the world), by the end of my stay we had two sick tunes blasting at the Freedom Skatepark, for the Energetic Nomads by the Energetic Nomads. 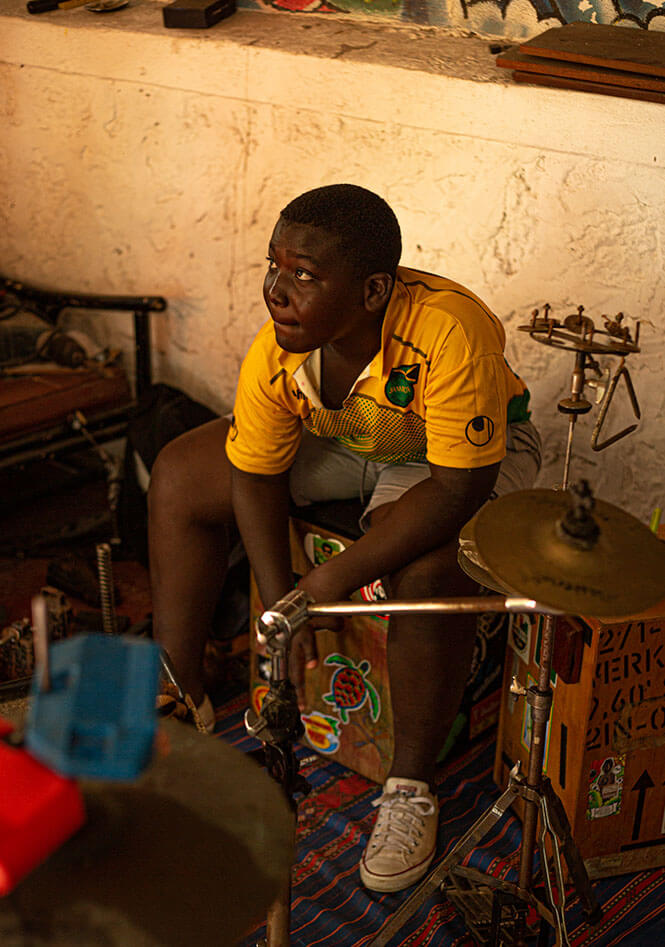 Biggup to the boys who wrote the lyrics themselves, absolutely smashed the recordings and make me tear up every time I re-listen:

As well as everyone without whom none of it would have happened. Thank you:

Concrete Jungle Foundation is currently looking for international volunteers to help run activities at the Freedom Skatepark in Jamaica. Since starting in 2020 we've implemented programmes in skateboarding, education, photo/video, art, and music. And we highly encourage volunteers to introduce new workshops that match their interests, skills and qualifications. If you're keen to get involved, please have a look at our open positions and get in touch today.