The vision for the Girls Skate Ja event was to provide girls and womxn the chance to fully occupy the Freedom Skatepark for a day — to draw, sing, paint, skate, bike, roller skate, and more — as these activities are usually dominated by boys. It was a day of celebration where girls of all backgrounds and ages would feel welcome!

The event kicked off at 1:00 pm. We had Red Bull’s music truck show up with female DJs; Dj Iset Sankofa, Dj Hotlipz and DJ Sherkhan. Unfortunately, the rain started pouring heavily as soon as we set up. My friend Keida and Olivia called saying it was raining in the following parish too, so we were considering postponing the whole thing.

Some kids were playing in the rain, sliding down the ramps like in a water park, which lightened the mood a bit. And despite the heavy showers, more people started to show up. I was shocked and grateful to see this many people showing up to support the event despite the weather conditions.

And suddenly I noticed the clouds seemed to be floating over the mountains. Let’s do this, I thought.

After some mopping the park mostly dried up and so we began the all-girls skate lessons. I handed out as much gear and boards as we had but it wasn’t enough for the crowd so I split the group in two. The first group was 28 girls and the second 20, I was so thrilled about that! During the skate classes we went through the basics of standing on a board and maintaining balance, how to get off and how to move around, so that they were able to skate by themselves.

The younger girls were quite nervous and only felt comfortable with me guiding them. I could really feel how important it was that I, like them, was a girl. That they felt safe with me as the instructor.

In the background we had other activities too. The music was playing all day, and we had an arts and crafts station where girls got to paint a mural. The resulting piece featured the text ‘Dream big, Fly high”, which was a metaphor for using sports as a way to materialise our dreams and propel us into better accomplishments. That is to say that in life, as in skateboarding, you can reach your goals through determination, practice and repetition.

Thanks Keida for curating the art workshop! 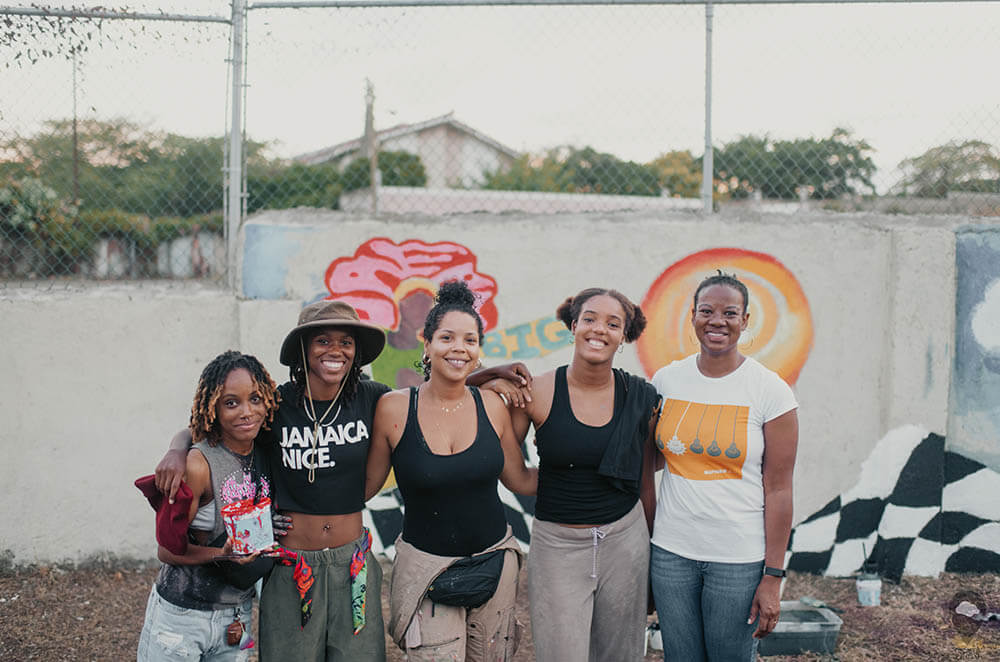 The regional and national media attended the event too. The Jamaica Gleaner came to interview me so I dragged my friend Kadiya along, and we even got invited to be on live TV a few days later! One of the main reasons for this event was exactly that — to get a platform to reach as many Jamaican girls and women and encourage them to come out and skate — so this was a big step towards that goal!

Towards the end of the day we gathered everyone in the bowl to announce the raffle winners as well as have a product toss for the whole crowd. Thanks to everyone that supported us with boards, shoes, hardware, wheels and the likes - all the money raised went back into managing the Freedom Skatepark. And special mention to Jamaica Nice for coming through in a big way — we couldn’t have done this without you :)

To close things off we were blessed with a live acoustic performance by Olivia Wilmot, a.k.a. EarthAndTheFulNess. As she was gracefully singing bits from her latest ep the rainbow came out so bright. That’s a moment I won’t forget. 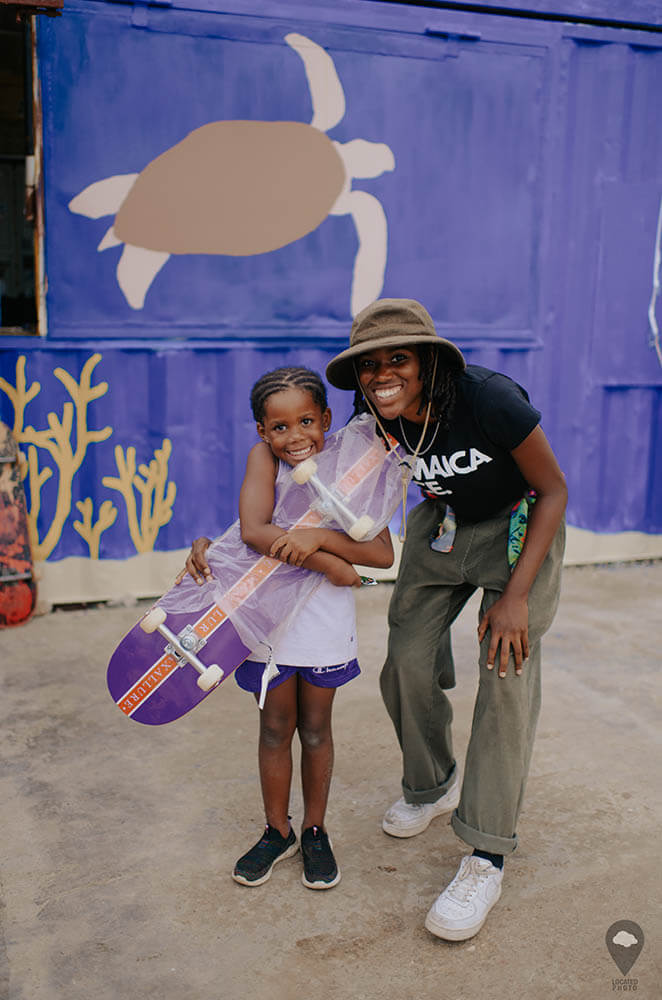 Throughout the day (and after) I got so many supportive and thankful comments I felt almost overwhelmed. Some parents said I had changed their girl’s life. So many people came up and thanked me. Even a guy spoke about skateboarding being magical, and that he was ‘skateboarding towards freedom’.

While it rained early in the day, I felt the water washed off the male dominance skateparks usually have, and really cleansed the space. The showers cleaned the park for us to make it our own for that day, allowing us girls to occupy the space fully, encouraging each other, and feeling 100% safe. For me, the vibe of that day was unmatched.

Thank you so much to everyone who took part in this event. It was definitely a dream come true. My heart was on fire to see the park so filled with all the girls being happy and trying out skateboarding. And I’m so much looking forward to organising something similar again soon! 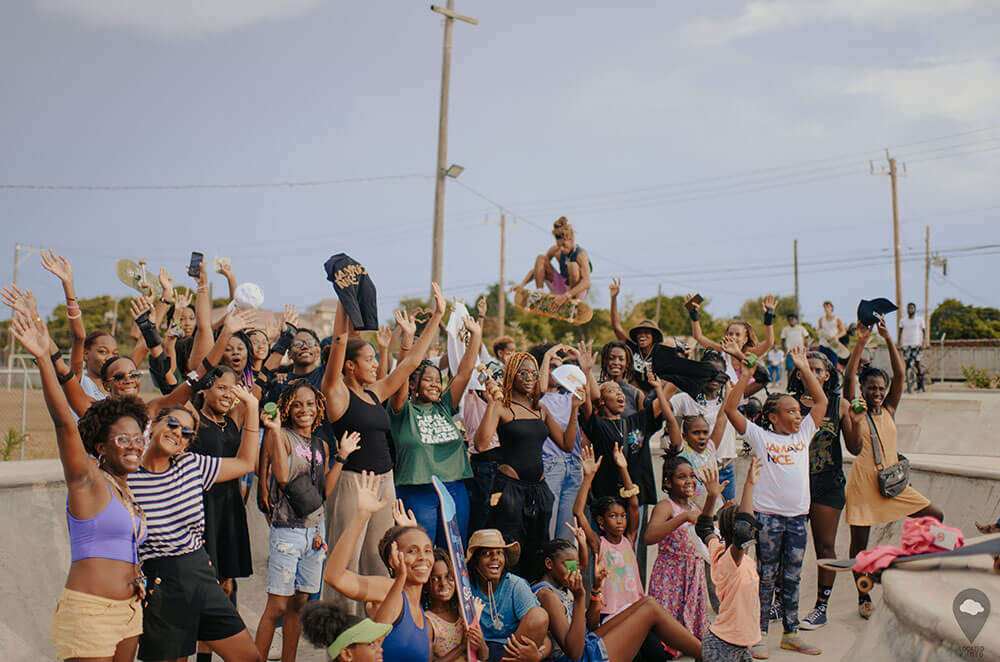 If you have the means to support our work, please consider joining our monthly donor programme today. We're a small, non-profit, charity who have been making a difference to underserved youth worldwide and everything counts!

You can also get merchandise from our online shop. All profits go to maintaining the charity’s operations over the world.

Thank you for helping us plant the positive seeds of skateboarding! 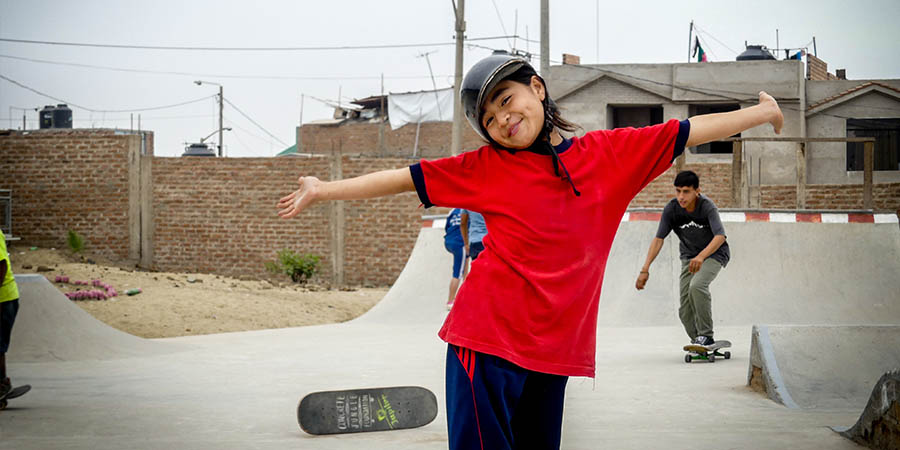 Over 5 years of changing lives with CJF Edu-Skate

In 2017, Peruvian children who had never seen a skateboard before were given one for the first time thanks to the Concrete Jungle Foundation’s Edu-Skate Programme. Now, some of them are shredding the local streets. 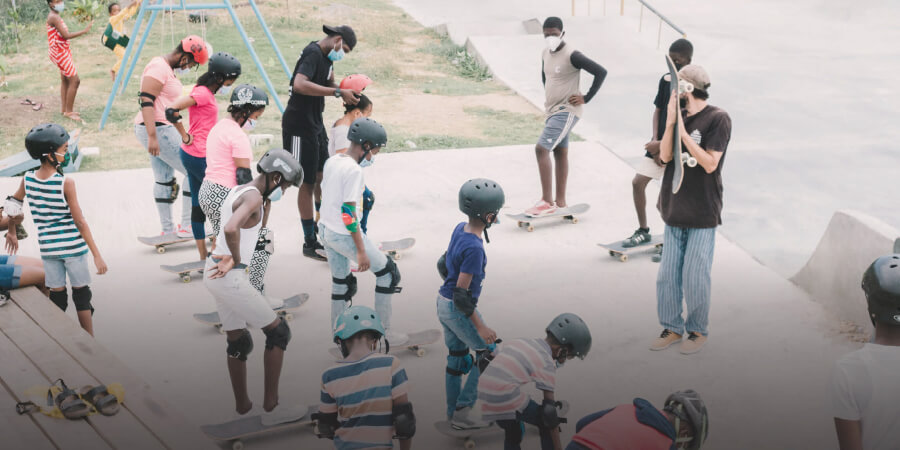 Our June residency at Stranded FM was broadcasted from the Caribbean shoreline of Bull Bay, Jamaica. Over three months we are working with Concrete Jungle Foundation on an ambitious research project to record the impact of The Freedom Skatepark one year after construction.

Interview with the Energetic Nomads from Jamaica

A year after they started skateboarding, we caught up with the Energetic Nomads, the first group of graduates from the Edu-Skate programme at the Freedom Skatepark. They have grown into a close-knit group that spends most of their days together. Get to know the group better through the following group interview.

Sharing the passion for Skateboarding in Peru - in times of COVID

On Friday, March 13th, six and a half months ago, we did our usual closing circle at “La Rampa,” our skate ramp in Cerrito de La Virgen, Huanchaco. This circle is one of our favorite times during an Edu-Skate lesson because both kids and volunteers have the opportunity to share what they learned and how they felt that day ...